On Thursday night, my family and I had takeout on the porch: ziti, pizza, bread, and wine (for the grownups). When the kids were finished eating, they ran around the yard and I grabbed my computer to watch my dad conduct a Maundy Thursday service from Iowa. Since we still had bread and wine in front of us, from the end of our meal, we easily participated together in a last supper of sorts. And what’s funny is this…that was probably the most authentic communion I’ve ever had. 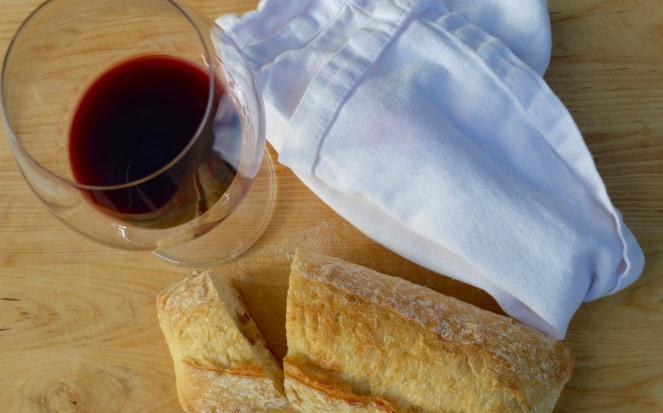 It kind of took my breath away. That last supper Jesus shared with his best people, after a meal was informal, sharing time together like they normally did. No one dressed up for that “Lord’s supper”, no one saw it coming, there were no perfectly coordinated ushers and light piano music. They took the body and the blood together around a table with their master.

And then he was led to a criminal trial which culminated in his death.

After a somber weekend, likely full of fear, confusion, anger, and grief, it was just a small group of women who gathered at his tomb to anoint his body.

Mary Magdalene, Mary the mother of James, and Salome bought spices, so that they might go and anoint him.  And very early on the first day of the week, when the sun had risen, they went to the tomb.  And they were saying to one another, “Who will roll away the stone for us from the entrance of the tomb?”  And looking up, they saw that the stone had been rolled back—it was very large. And entering the tomb, they saw a young man sitting on the right side, dressed in a white robe, and they were alarmed.  And he said to them, “Do not be alarmed. You seek Jesus of Nazareth, who was crucified. He has risen; he is not here. See the place where they laid him.  But go, tell his disciples and Peter that he is going before you to Galilee. There you will see him, just as he told you.”  And they went out and fled from the tomb, for trembling and astonishment had seized them, and they said nothing to anyone, for they were afraid.

Did you notice that they, too were concerned about logistics, “who will roll the stone away?” But none of that mattered because He had risen! He had conquered Death! And their only job now was to proclaim the good news! “Go and tell!! You will see him!”

At his tomb, there was not a choir, or beautiful children in smocked dresses, or bunnies. Their logistical concerns were also just not important.

That day…it just his friends and their loved ones finding out that Christ the Lord had risen, He had risen indeed! Can you imagine it? Imagine it. Their dead friend was alive! What joy they must have felt!

Maybe today, apart from our “Church family” but gathered globally with our actual families, we will experience the empty tomb in a way that is unforgettable. May the pang of crucifixion and death be a little more poignant in the midst of global pain and grief.

But may the joy of a risen Savior surround you on this very unique Easter. Perhaps, being forced into a celebration we didn’t plan (or want) that doesn’t feel as celebratory as it usually does is exactly how we’re meant to experience Easter this year. May the simplicity of couch snuggles and family worship draw our hearts back to that day, 2000 years ago, when death would not hold our King.

May we tell about Him!

And may we SEE Him!

Christ the Lord is Risen.

He is risen, indeed.

One thought on “Easter at Home”

This site uses Akismet to reduce spam. Learn how your comment data is processed.